Corp Cru humorously expresses state government and the establishment’s costly and tireless efforts to continue to perpetuate the idea that the power of government will illuminate the lives of the people through the Utilities Credit Card. 24”H x 42”W acrylic on canvas. 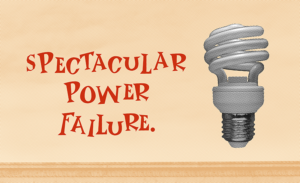 The LED light bulb is representative of the antiquated, monopolistic and highly leveraged public utilities that power it. We are all subordinate to the power of the providers of electricity despite the efforts of a few who believe it can be provided for free by the sun. Public utilities have a double dependency on you. As a tax payer and as the consumer, we pay twice for electricity. Each time we pay the electric bill we perpetuate the mismanagement of and the kaleidoscopic disarray of state politics who regulate the power monopolies. “Utilities” represent the wool that has been pulled over your eyes by the tactics of public utilities and the state governments who regulate them.

The Utilities Credit Card refers the Corporation player to remove the polished aluminum light bulb or “Utilities Ailment” from Janet Yellen on the 8′ x 4′ Corporation by Corp Cru game board. Remove it without touching the sides of the Utilities Ailment cavity and you’ll continue to keep the consumer in the dark. Touch the sides of the Utilities Ailment cavity with the 24″ aluminum tweezers and you’ll suffer a spectacular power failure causing state governments to subsidize the installation of solar panels on the roof of every one of your customers causing you to buy power from them for a change and also cause alarm to Janet Yellen.