Corp Cru observes and expresses the establishment’s galactically stupid methods of administering education, through the most distinguished symbol of idiocy; the Dunce Cap. The Education Credit Card is 24”H x 42”W silkscreen acrylic on canvas. 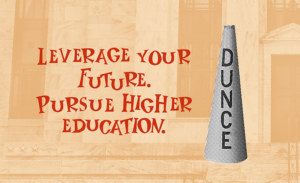 Education sure is a complex and expensive proposition. The end result for the have nots seems to be a push as they spend the rest of their careers ridden with student debt. Guess who the lender of last (and first) resort is? The US government, and they don’t provide for discharge in bankruptcy. Your pension plan, if your employer has one left, is filled with securitized student loans and they are all stamped AAA despite the high delinquency rate. Issuing more US debt and printing more dollars is the modus operendi for the U.S. as default rates soar. Public schools are run by the same idiot politicians we mentioned in Utilities [link to Utilities]. Don’t worry. It gets better. There are strings attached to the donations to those large university endowments from high net worth individuals and major corporations who dictate what universities teach. The only tickets to the admissions office of big 10 schools are those held by the haves which are engraved with seven or more zeros. Otherwise it’s like winning the lottery unless you are Chinese. When you weigh the pros and cons, the only benefits are the connections you make in class. They are the world’s next CEOs, attorneys, engineers and doctors. Education represents the opportunity for the US to print money and depress the dollar to benefit earnings of international corporations who can then afford the donations to the endowments and for you to help them.

The Education Credit Card refers the Corporation player to remove the polished aluminum Dunce Cap or “Education Ailment” from Janet Yellen on the 8′ x 4′ Corporation by Corp Cru game board. Remove it without touching the sides of the Education Ailment cavity and you’ll perpetuate the globalization curriculum, populating the classrooms with the offspring of its richest beneficiaries. Touch the sides of the Education Ailment cavity with the 24″ aluminum tweezers and you’ll set off similar events described in Fashion [link to Fashion] causing a massive curriculum change, sending university recruiters out begging for the attendance of lower and middle class American families and causing Janet Yellen to question her own education.