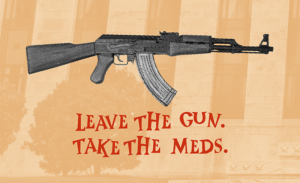 With over 100 million sold, the AK-47 is most popular black market assault weapon on the planet. It never jams. It shoots in mud. It shoots in sand. It shoots in water. It doesn’t rust. It’s the assault weapon of choice for freedom fighters, rebels and terrorists. If that dollar keeps dropping as we print the kind of money we described in Fossil Fuels, it may be the only weapon the US Military could afford. Terrorists take gold in trade for AKs if there is still any left in Fort Knox. Don’t worry about the second amendment. The liberals will still provide for the bearing of arms that can’t possibly be of any use to even the most trigger happy moron let alone a sharpshooting, militant protector of the Constitution. Forget about your children, Defense represents the last opportunity you’ll ever have to protect those iPhones.

The Defense Credit Card refers the Corporation player to remove the polished aluminum AK-47 or “Defense Ailment” from Janet Yellen on the 8′ x 4′ Corporation by Corp Cru game board. Remove it without touching the sides of the Defense Ailment cavity and you’ll eventually pass precedent setting legislation outlawing every weapon in the country. Touch the sides of the Defense Ailment cavity with the 24″ aluminum tweezers and you’ll set an opposing precedent again, like the one we described in Communications [link to Communications], reaffirming the people’s right to not only bear arms but to storm government, yet again sending Janet Yellen back to Fort Hamilton, Brooklyn, where she may not be too safe this turn.