Corp Cru humorously expresses through the Fossil Fuels Credit Card, the dedication of the government and the establishment to continue printing money to perpetuate their campaign of enslavement. The question is; when do they cover? 24”H x 42”W silkscreen acrylic on canvas. 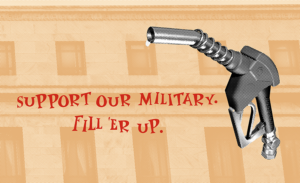 The perfect scapegoat for foreign war is liberation. Just ask the oil companies who donate billions to super PACs and congressional and presidential campaigns. Nothing is as precious as a hole in the desert. These are our interests in the region but to you, the consumer, we are liberating people under dictatorship, which consequently comes with Trojan horses full of skinny little jihadis, a cute ancillary benefit for keeping the appropriations spigot wide open. As the United States prints money to fight terror and engage foreign military campaigns, our national debt balloons to $20 Trillion, devaluing the dollar which, get this; gives the additional benefit to the very same corporations helping to wage war whose earnings triple as the result of a free falling dollar. But magically, the Federal Reserve recently seems to be missing their target inflation objectives. Wait; what? Jesus Harold Christ on rubber crutches! It’s the ultimate massive short position put on by the political and economic establishment! That’s who has the $20 Trillion we borrowed. So what happens to domestic affairs and the dispensable American People, excluding our poor veterans? It sends everyone plummeting further into economic enslavement. So the government sends out the spin doctors to convince you that things have never been better! LOL! Are you convinced? The Fossil Fuels Credit Card represents the economic, political and environmental degradation of life on earth. Or is it just here in the USA?

The Fossil Fuels Credit Card refers the Corporation player to remove the polished aluminum gas pump handle or “Fossil Fuels Ailment” from Janet Yellen on the 8′ x 4′ Corporation by Corp Cru game board. Remove it without touching the sides of the Fossil Fuels Ailment cavity and you’ll continue to build nations in the desert and take hostages, especially the US consumer. Touch the sides of the Fossil Fuels Ailment cavity with the 24″ aluminum tweezers and you’ll suffer another spectacular power failure similar to the one we mentioned in Utilities only this time causing global governments to finally pay some attention to what’s happening domestically which will this time cause Janet Yellen to climax.