Corp Cru humorously expresses the establishment’s opportunity for the ultimate act of enslavement as well as the kaleidoscopic implications of moral hazard, human greed, economic volatility and corporate might in the housing market through the Housing Credit Card. 24″H x 42″W silkscreen acrylic on canvas. 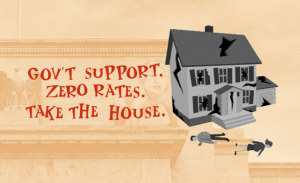 Housing represents the largest element of spending for consumers. As some consumers reach for the American Dream, they sometimes stretch beyond their means and experience the ultimate American Nightmare as banks, landlords and other institutions who play a role in housing begin to bleed the consumer as they experience economic devastation and free fall into foreclosure, eviction and bankruptcy.

The Housing Credit Card refers the Corporation player to remove the polished aluminum broken down house or “Housing Ailment” from Janet Yellen on the 8′ x 4′ Corporation by Corp Cru game board. Remove it without touching the sides of the Housing Ailment cavity and send your opponent into foreclosure, eviction and catastrophic financial ruin! Touch the sides of the Housing Ailment cavity with the 24″ aluminum tweezers and the judge presiding over the foreclosure proceeding could vacate the mortgage obligation of your opponent, leaving them with clean title, forcing you to take a write off and also cause alarm to Janet Yellen.