Corp Cru humorously expresses the government and the establishment’s fascist attempt to cause the ultimate transfer of power and wealth from the people through the Financial Services Credit Card. 24”H x 42”W silkscreen acrylic on canvas. 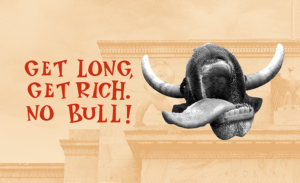 During the housing bust of 2008, there were Federal bailouts and capital infusions. Since then, easy monetary policy has led to zero interest rates and consequently, a “drunken bull market” which has widened the wealth gap. Chairman Yellen’s Federal Reserve has perpetuated a historic policy of quantitative easing and easy money. If you didn’t have any money in 2008, you fell further into economic enslavement as outsourcing and cost cutting continued to hollow out the middle class like an army of termites. At the same time, stock and housing prices, as well as the cost of living have surpassed levels not seen since before the “Great Recession”. Your mortgage, credit card balances, student loans, car loans and insurance policies are all neatly stitched together, packaged and sold off to yield hungry institutions like your pension fund and university endowment by large banks who earn large fees for doing so.