Corp Cru observes and expresses how the establishment delivers and spins its message, through the Propaganda Credit Card. 24”H x 42”W silkscreen acrylic on canvas. 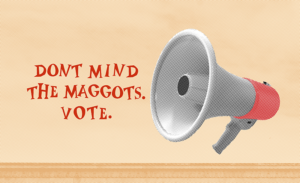 Ever wonder if any of the things you hear in the press and media are true? How about elections? You know what? Strike that. Your choice is to either believe what you hear, interpret what you hear or ignore it all together. The effectiveness of propaganda is based on the prospect of stupidity. Election campaigns, depend on propagandists to form and deliver their message (scare voters). Now that you know that propaganda itself means deception, gullible voters desperate for leadership will swallow anything that sounds sensible. But hey, all they want is your vote. The questions is; what are they going to do with it? We apologize for being terse and serious about the subject. But if you are that stupid, then you deserve the candidate that spins the most resonant message. There’s nothing funny about gullible voting blocs when you consider the implications of the wrong candidate.