Corp Cru expresses and observes the efforts of the establishment to program the consumer, through the Media Credit Card. 24”H x 42”W silkscreen acrylic on canvas. 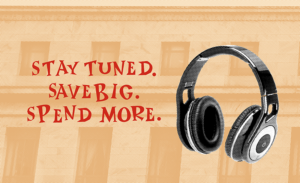 Wow! What a show! The ultimate marketing device. When you think about it, we are the “Manchurian Consumer”. Every audible sound we hear in entertainment and media triggers a desire to “buy, buy, buy”! Is there anyone out there telling us to “save, save, save”? Saving money means losing money. Just ask the financial advisors preaching higher stock prices who actually tell the truth when they say “cash is trash”!

The Media Credit Card refers the Corporation player to remove the polished aluminum headphones or “Media Ailment” from Janet Yellen on the 8′ x 4′ Corporation by Corp Cru game board. Remove it without touching the sides of the Media Ailment cavity and you’ll continue to program the public into oblivious spending. Touch the sides of the Media Ailment cavity with the 24″ aluminum tweezers and cause Wikileaks to release millions of emails between media, industry and government revealing the real truth about the establishment causing anarchy sending Janet Yellen into the situation room.