Corp Cru expresses and observes the establishment’s presidentially appointed and supposed “neutral” governor of the US monetary system; the Chair of the Federal Reserve Board of Governors through #targetinflation. 8’H x 4’W mixed media on wood. 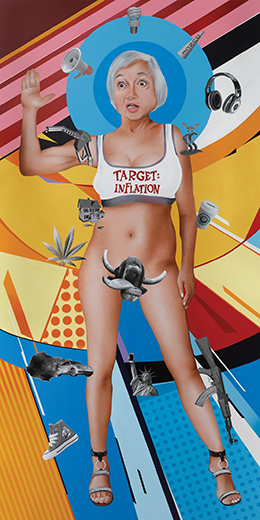 Behold! The chair of the Board of Governors of the Federal Reserve! Janet Yellen was born in Brooklyn, New York. She is by any account, the most powerful woman in the world. Her words alone cause the immediate reallocation of trillions of dollars around the world. Her controversial tepid and dovish approach to monetary policy has caused the zero interest rate, free money bonanza of the US economy to supercharge the wealth of the richest of the rich! I mean, c’mon man, the new entry level to the Forbes 400 list of Richest Americans is now a staggering $1.7 Billion! The average net worth of all members is now $6 Billion!

What has eight years of easy monetary policy done for the rest of America? Nothing! The wealth gap has never been wider. So what is this office and why is it so powerful? Who is the Federal Reserve anyway? Most Americans have no idea. In order to answer these questions specifically, one must study the fragmented global socio-economic landscape for the 100 years leading up to 1913 and look at the conditions and the nature of such suckers that led to the adoption of the Federal Reserve Act of 1913. In short, it is, believe it or not, a private corporation that was formed by a few individuals to facilitate the finances of the United States Government. LOL! Suckers! It has no checks AND, get this; NO BALANCE! That’s right! No balance. Its first transaction after its formation was the opening of an entry on its books based on nothing! No gold, no dollars, no assets of any kind! The entry marked a new epoch in the annals of thievery of global finance. The entry caused the provision to the US Government with money to pay its bills. Like magic.

Thomas Edison was opposed to the Fed and once said; “If the government can issue an IOU for the money to pay its bills then it can issue the bills themselves. One benefits the few and the other benefits the many”. Ominous warning.

So it was off to the races in November of 1914 when all 12 Regional Federal Reserve Banks commenced operations which coincidentally coinsided with the beginning of WWI. Wait. What? Yes. Thats right. In a nutshell, a few global men financed WWI through the federally adopted institution.

Ever since its adoption, the Fed has enabled borrowing by the US like a co-dependent wife of an alcoholic. As the result, the national debt has now reached $20,000,000,000,000. That’s Twenty Trillion Dollars! The Fed does not control how much money the government borrows any more than a liquor store controls the amount of alcohol consumed by an alcoholic! The alcoholics do! That’s right. In this case, congress does, LOL! It does so through the congressionally resolved “Debt Ceiling”. Thats like the amount of alcohol that the alcoholics decide that they will be drinking.

So…the democrats and republicans fight for days on the floor of the senate in the ultimate battle for ridiculous self serving legislative inclusions in a bill that is supposed to allow the government to continue to operate. Honestly, we can say so much here and Corporation expresses the humor of all this but there is nothing funny about the financial condition of the United States of America and how its ultimately gets there.

The distinguished chair has many times stated that the Fed has failed to achieve its 2% objective or, “target inflation” rate. One may ask; “Why do we need inflation anyway”? Good luck getting a straight answer but here it is in plain text; “The Federal Reserve would lose control of its business of setting monetary policy if wholesale prices fail to maintain a 2% increase in wholesale prices per annum”! Who the fuck do the American People work for?!?! Who’s country is this?

This balancing act throws American businesses and individuals into a subordinate position to the Federal Reserve who manipulates policy into causing a rise in wholesale prices. When wholesale prices rise, the American consumer get fisted!

So. As the chair of the Federal Reserve, poor ol’ grandmotherly and pious Janet Yellen feels the pull of the weight of the world while everyone from congress, the White House, the banking industry and the rest of the world grabs her by the pussy and tries to take pieces from her while the subordinate consumer, as usual is bent into an uncompromising position feeling like they just got fisted. #targetinflation expresses the totality of this “grab” which is the basis of the corporatocracy under the fractional reserve banking system as governed by the Federal Reserve.