Corporation and Fister Opens at Whitebox

Corporation; Corp Cru’s 50 piece satire of the cost of living confined within a parody of the old family board game; “Operation”, and “Fister” a 15 piece nonpartisan parody based on the game “Twister”, became the epitome of relativity with raving fanfare at its opening at Whitebox in New York City’s Lower East Side on Wednesday, January 25, 2017. 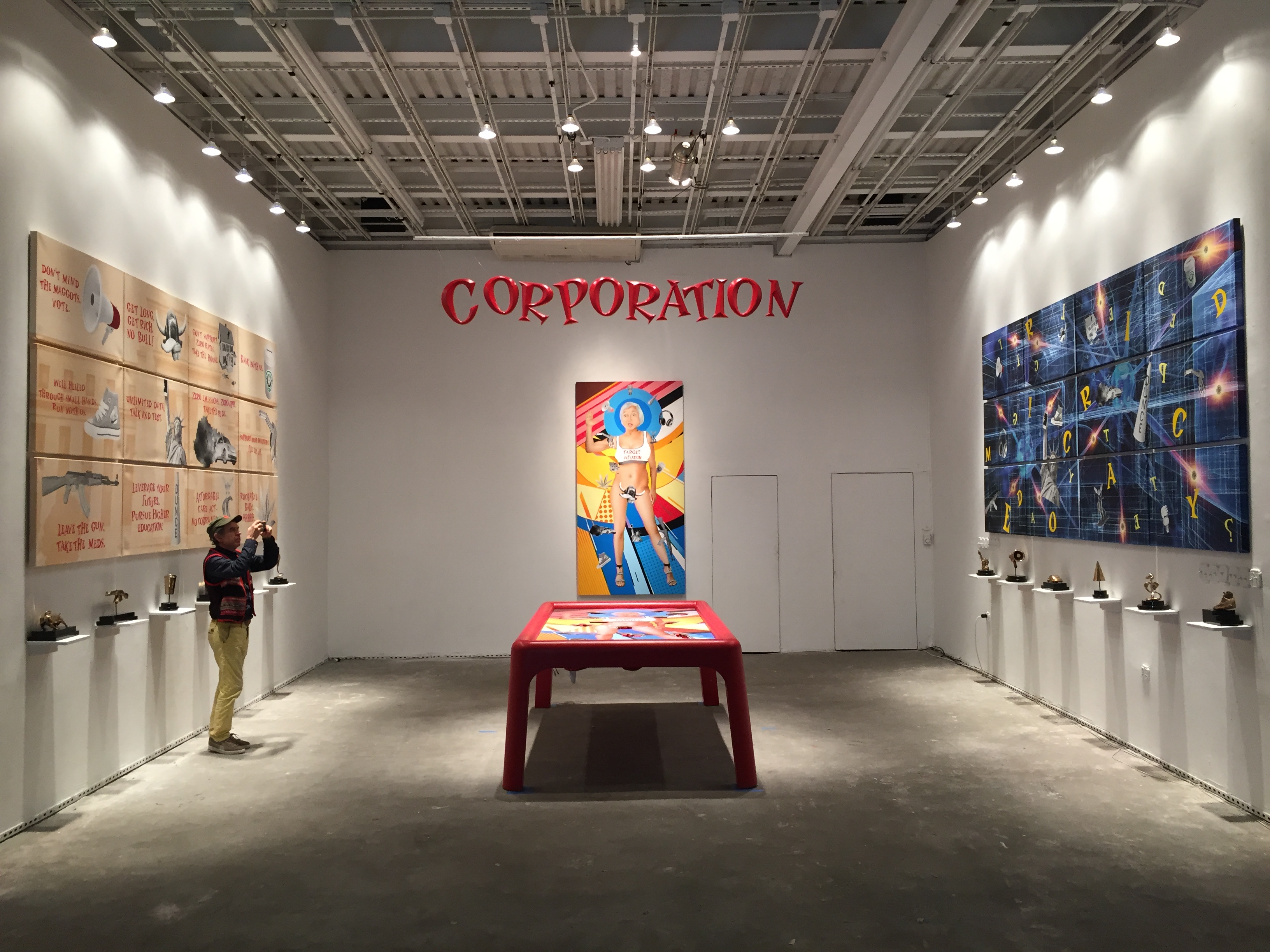 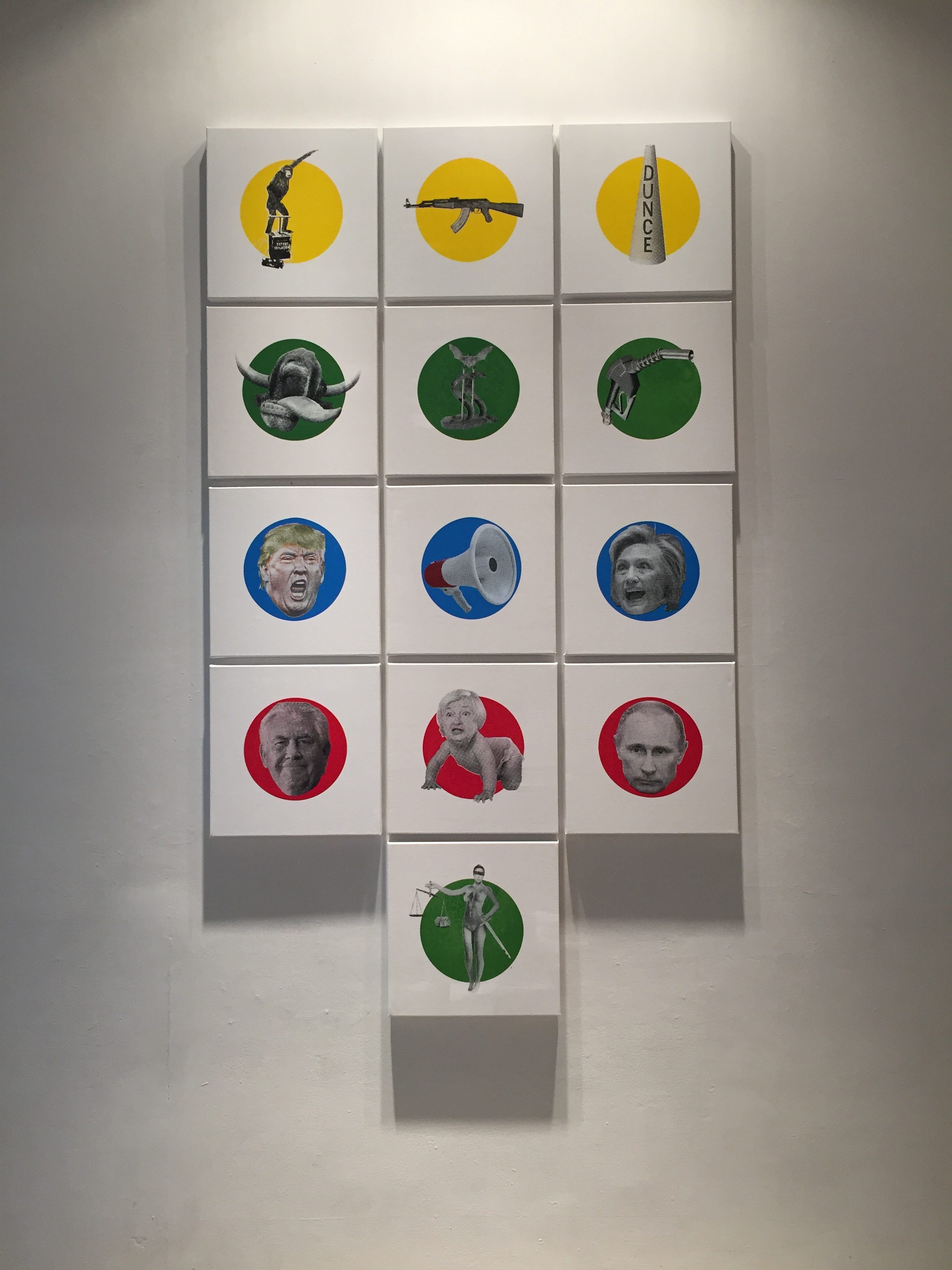 Fister is a growing number of original works based on a parody of the game Twister.

Whitebox, a 501(c)3 founded in 1999 by Juan Puntes, which has become the prestigious AAA farm team for the major museum system, co-curated the exhibition. “We attended Corp Cru’s last show and believe that Corporation and Fister has become the most relevant popart/fineart collection in a short time in light of current events”, said Puntes, the world renowned art director of Whitebox.

Corporation debuted at Georges Berges Gallery in New York City’s upscale Soho neighborhood on October 13, 2016. Optimism of the first female POTUS and four more years of globalization, national healthcare filled the bars, restaurants, art galleries and corporate boardrooms. Impending utopia was being celebrated by many in greatest city in the world. Hillary Clinton for President was a sure thing despite interference from all sorts of so called “truth tellers”. The media was on fire as they blotted out, as best they could, all the negative reports and all but called the outcome of the election. 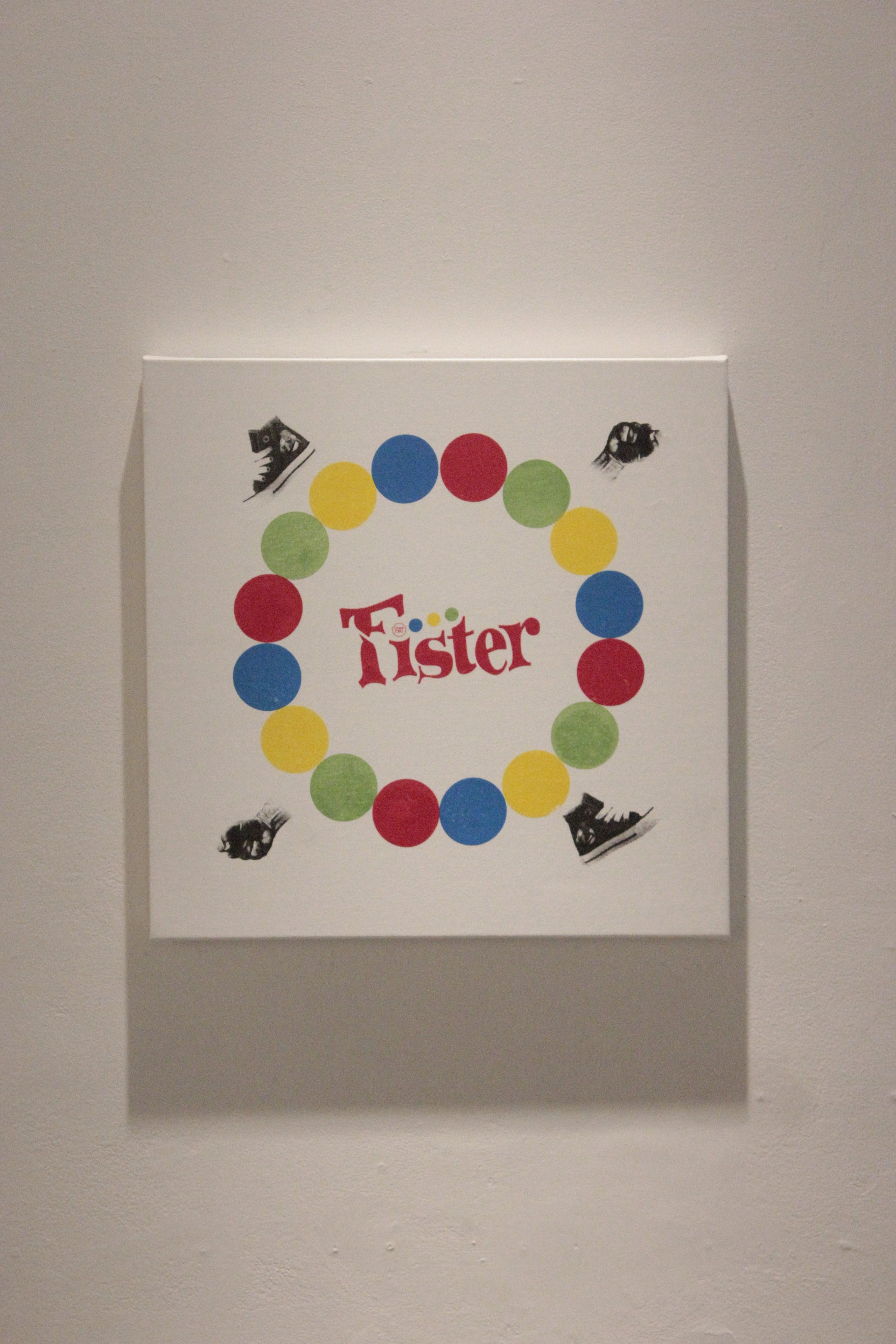 Meanwhile, beyond the canyons of the corporatocracy, about 60 miles west of New York City, a whole different outcome was taking shape. Angry, fed up victims of the widest wealth gap in history raced in troves to the polls in what seemed like a coup. Very few would ever have believed that at approximately 10PM EST on November 8, 2016, the power that would change the world rested in the hands of a basket of 53 million deplorables who rose up in revolt and spoke on behalf of a divided America. 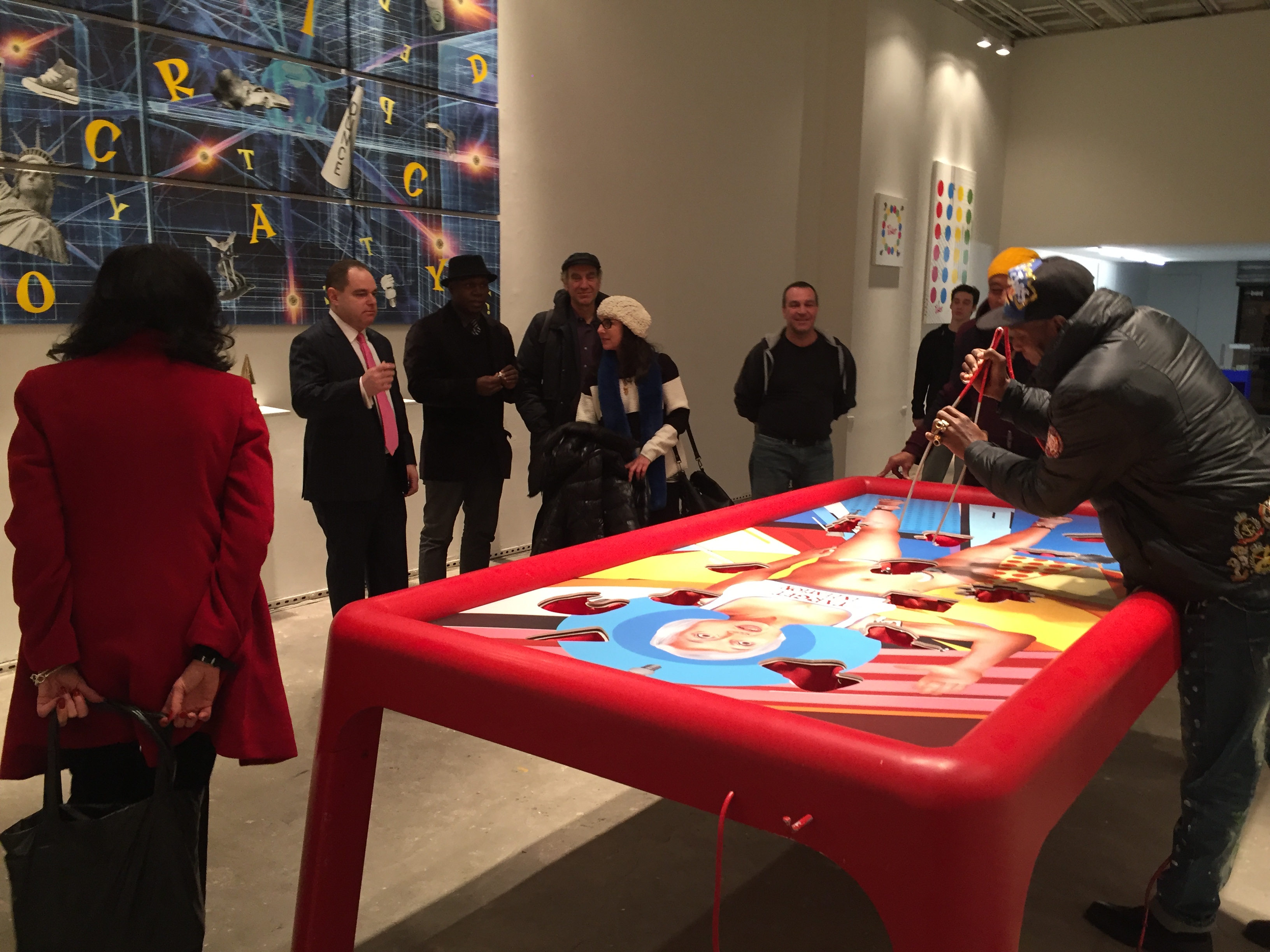 By the time Corporation closed on November 13, it was a completely different world. Like it or not, it’s the dawn of a new era.

But for the safe space inside Whitebox, you can almost hear the pitter patter of the dirty sneaky rats in the somber streets of New York City. Inside Whitebox, however, a loud reverberation dating back to the beginning of time can be seen, felt and heard. The Whitebox produced exhibit, a hilariously explosive and controversial expression of socioeconomica, revealed oppressive elements of life under corporate rule and its amazingly accurate, unexpected transcendence to the present day.

Corporation by Corp Cru features the Chairman of the Board of Governors of the Federal Reserve, Janet Yellen being picked at with 24” tweezers by her constituents and her opponents. Everyone at Whitebox who attended wanted a piece of her and they desperately tried to take one. Corporation expresses a satire of the cost of living through 50 original works consisting of everything from polished bronze and aluminum to silkscreened acrylic on canvas. 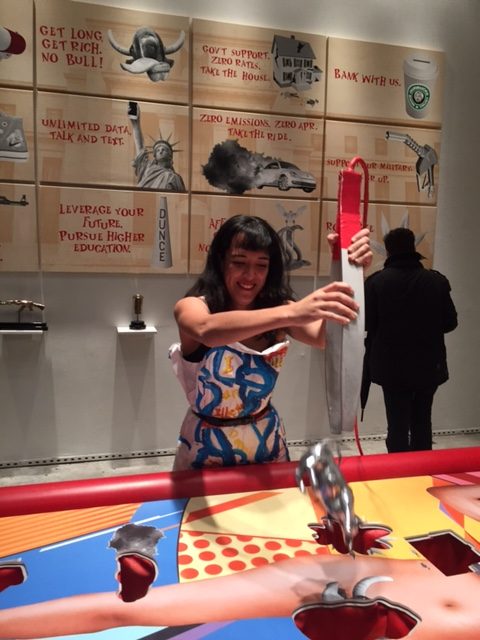 Players must remove aluminum sculptures from the cavities of beautiful Janet Yellen without touching the metal edges.

Sounds of newsy dialogue, speeches and relevant music expressing the dangers and temptations of Babylon rang out over the sound system when attendees touched the sides of the “ailment cavities” and couldn’t get the piece they wanted.

Fister, a growing 15-piece exhibit conceptualized prior to the October/November show depicted imagery of prospective political players in an arrangement substantially similar to the original “Twister” game. It expresses the prospect that; no matter what side you are on, we may all be getting Fisted.

Corporation and Fister runs through February 28, 2017.

Corp Cru is a group of visual artists that was formed in June of 2016. Corp Cru shows in a controversial and exploitative fashion the social and economic issues that result from certain oppressive measures promoted by our establishment. Corp Cru is the creator of the Corporation Series of 50 original works of art based on a parody of the familiar “Operation” board game. Corp Cru is funded by a group of angel investors who share the same artistic vision. Please visit Corp Cru at www.corpcru.com.

Corporation is an exhibit of a series of original works of art by Corp Cru that expresses a hilarious and provocative socioeconomic parody of the traditional and familiar board game.  Corporation will be on display at Wite Box, 329 Broome Street, New York, NY 10002 from January 22, 2017 through February 28, 2017. Visit www.corpcru.com/corporation

Fister is a satirical parody of the family game Twister. Fister is a vision of a socially and economically oppressed America expressed in 26 original works. Fister symbolically refers players to spin the dial to place themselves in an uncompromising position.