The exhibit caught the attention of the financial world when Yahoo Finance begged for a first look. Click here to view Yahoo Finance feature. 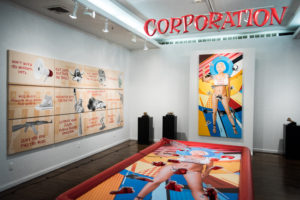 The festivities began with a number of high profile attendees playing a round of Corporation by Corp Cru. Guests were plucking pieces from the Corporation by Corp Cru game board. Some of the more popular pieces plucked from Janet Yellen, the pious and grandmotherly Chairwoman of the Board of Governors of the Federal Reserve, were “Healthcare by Corp Cru”, “Fossil Fuels by Corp Cru” and “Propaganda by Corp Cru” which are cast aluminum representations of a socioeconomic and political satire.

Provocatively expressed, Chairwoman Yellen sports stiletto heels and a sport crop top donning the words “Target: Inflation”.  Cavities plotted in and around her gorgeous figure contain sculptured polished cast aluminum expressions of socioeconomica. “The pockets are deep”! warns Jason Meyers, Chairman and art director of Corp Cru, as each piece represents industries that play a substantial and controversial role in the cost of everyday life. 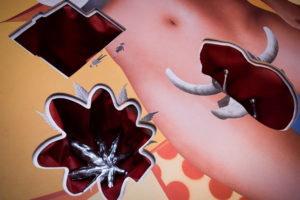 Every player who took a turn failed to overcome the deep pockets of wealth expressed by the 50 piece exhibition, a hilarious expression of life and its elements of monetary expense and politics under the taxing corporatocracy.

A musical score relevant to the current socioeconomic landscape underlies each of the newsy speeches and controversial sounds that play when the sides of each of the cavities are touched by the 24″ tweezers. “Credit and Debit Cards” containing humorously expressed punchlines relevant to each of the sculpture refers the player to remove the corresponding aluminum sculpture from scantily clad Chairman Yellen.

Each of the aluminum sculpture contained within the deep pockets of the game are replicated in polished bronze mounted on black marble. Each were placed along the lighted walls and windows of George Berges Gallery, a reputable upscale contemporary art gallery based in New York City’s Soho District.

Gene Epstein, celebrated economist and Chief Economics Editor of Barrons, was also in attendance at the Premiere and gave a speech about the Federal Reserve. Comical interruptions by Jason Meyers demanding explanations of the Federal Reserve’s ownership and its controversial manipulative monetary policies to the audience caused the distinguished member of the establishment to recompose himself. “We made Gene a part of the parody of the very establishment the exhibit makes fun of” said Meyers. Gene Epstein and Jason Meyers became friends during negotiations with the gallery hosting the exhibition. “I have a lot of respect for Gene. I was honored that he attended and gave a speech. I have followed his commentary and theories for years. We often have spirited debates about the economy and the Fed”. 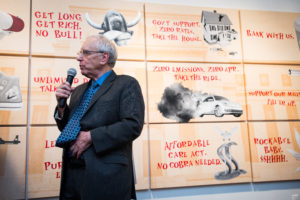 Gene Epstein, Chief Economics Editor of Barrons giving a speech about the Federal Reserve at the premiere of Corporation by Corp Cru at Georges Bergès Gallery in New York, NY. Photos by Mark Kauzlarich

Corp Cru is an emerging artist and is a legal entity formed in New York State by its Chairman and lead art director, Jason Meyers and Jason “Forge” Rodriguez, a former graffiti artist and master screen printer. “I have been urged by my friends and my peers to take on the artistic moniker of “Mr. Chairman” after the unveiling of the exhibition” stated Jason Meyers.

The exhibit, designed by and created under the direction of Corp Cru’s investment banker and venture capitalist Chairman Meyers by 7 artists, all dubbed “Cru Members” as the result of a conversation between Meyers and Rodriguez in February, 2016, is expected to tour galleries around the world. Cru Members posses a diversified array of skills which include metal fabrication and sculpting as well as screen printing and graffiti. 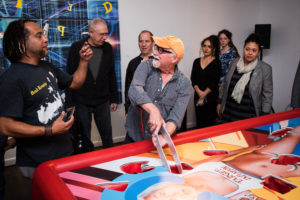 Our goal as the artist is to make people laugh and provoke thought through visual art while artistically eliminating the distance between the street and public and private art institutions. Our goal will be achieved when the exhibition arrives at its final resting place at a prestigious institution.

Corporation by Corp Cru is being exhibited at Georges Berges Gallery through November 13, 2016.