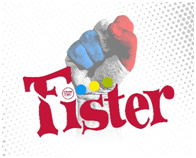 New York, NY. Corp Cru LLC (“Corp Cru”) announces the solo exhibition of its original works of art titled “Corporation” at Wite Box in New York City. Corp Cru will also premiere its second series of original works titled “Fister”. Both exhibits will be held on Wednesday, January 25, 2017 and will run through February 28, 2017.

Corp Cru has created a series of 50 original works depicting a hilarious parody of the cost of living confined in a provocatively expressed immersive exhibition.

Corporation features a series of 50 original mixed media works that features Federal Reserve Chairman Janet Yellen as the subject of an immersive and familiar game exhibit where players draw cards and take pieces from her.

Corporation expresses Chairman Yellen’s daunting task of balancing economic equilibrium and all of its inherent implications in the pursuit economic freedom for corporations and consumers in a hilariously expressed, highly provocative parody of the cost of living confined within the traditional and familiar board game.

As a neutral official of the largest, most powerful monetary institution on earth, Chairman Yellen faces pressure from Consumers, Congress, the White House, the Banking Industry and the Corporate world. As players draw “credit” and “debit” cards to take pieces of her, she is rewarded with beauty and an opportunity for pleasure.

The “Debit Cards” and “Credit Cards” are a series of twenty-four 24” x 48” canvas renderings expressed in controversial fashion from two perspectives; the haves and the have nots. Each Credit and Debit Card renders an image of the corresponding twelve sculptures that represent elements of the cost of living and controversial public issues and gives players the chance at freedom from economic enslavement by successfully removing one of the twelve 8”-10″ sculptures from Chairman Yellen’s body on the 8’ x 4’ mixed media game board. Touching the metal sides of the cavity containing the sculptures with the 24” tweezers will play a unique sound and will cause Chairman Yellen to react in a provocative manner.

Each of the twelve sculptures represent the largest elements of the cost of living as well as some of the most controversial social and political issues. Corporation renders a provocative and hilarious immersive expression of socioeconomic and political issues and provides players opportunity for reclamation and freedom from economic enslavement, as Chairman Yellen and her Federal Reserve Board of Governors attempt to balance the largest economy in the world.

Fister is a satirical parody of the family game Twister. Fister is an expression of a socially and economically oppressed America in 26 original works. Fister symbolically refers players to spin the dial to place themselves in an uncompromising position.

Corp Cru was formed in June of 2016 and is a group of artists that have assembled for the purposes of providing a voice of artistic expression. Corp Cru is funded by a group of angel investors who share the same artistic vision. Corp Cru is the creator of the Corporation Series of original works of art based on a parody of the traditional and familiar board game. Please visit Corp Cru at www.corpcru.com.

Corporation is an exhibit of a series of original works of art by Corp Cru that expresses a hilarious and provocative socioeconomic parody of the traditional and familiar board game. Corporation will be on display at Wite Box, 329 Broome Street, New York, NY 10002 from January 22, 2017 through February 28, 2017.

Fister is a satirical parody of the family game Twister. Fister is a vision of a socially and economically oppressed America expressed in 26 original works. Fister symbolically refers players to spin the dial to place themselves in an uncompromising position.

Wite Box is a not for profit alternative art space located in the heart of the Lower East Side of New York City. White Box is located at 329 Broome Street, New York, NY 10002. Visit www.whiteboxny.org.